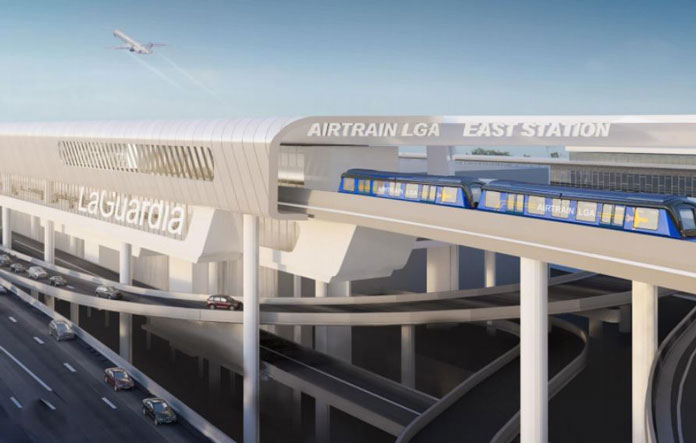 Route Is Indirect, Could Be a Lot Shorter

The planned route is a little indirect as the LIRR train will take passengers 10 miles beyond LaGuardia airport and then the AirTrain will bring them back again to the airport campus, which will mean that the trip could have been faster (and more reliable) if a different, more direct route was used. The Governor touted a trip time of 16 minutes to Willets Point and 6 minutes to LaGuardia Airport, making the whole trip 22 minutes from Manhattan, but analysts confirm that the longer distance you make any trip, the more likely it is to be delayed due to technical failure.

The AirTrain to LaGuardia plan will ease road traffic congestion in Queens by an estimated 18% which is a huge gain for a borough that is already creaking under the weight of traffic that seems to consume all of its roads at all times of the day. This change to rail will also be good for the environment with reduced carbon emissions and less road deaths on the notorious Queens Boulevard, where at least 150 people die each year.

The AirTrain plan includes the rebuilding of Willets Point/Citi Field and the station will then be able to hold ancillary airport functions including parking, car rental facilities and other airport services that are so desperately needed. Parking at LaGuardia Airport is already a nightmare for air travelers with the airport often running out of spaces. The AirTrain will make two stops at the airport. The first stop will be East Station and the second stop will be Central Hall. Then the AirTrain will turn around and head back to Willets Point.

The proposed solution for the AirTrain to LaGuardia still does not get any closer to the ultimate goal of a single train seat from Manhattan, something that none of the other New York Metropolitan airports have achieved either, demanding that riders always take two different trains to get to the airport. This will encourage passengers to still use other methods of travel to the airport as it can be quite a hassle to carry luggage from one train to another. Other major cities around the world that have already achieved the goal of a single train seat include London, Rome and Paris. Even Sydney, Australia has a direct single seat on the train, a convenient track that runs from 80 miles out of the city.